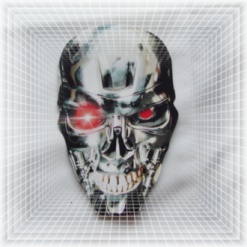 When the movie "The Terminator" first came out I was enthralled. A decent science fiction story starring the PERFECT robot with a lot of action. Who wouldn't be? Later when I moved into the VCR era, I bought the first 2 Terminator movies available at that time and decided to write down every one of Arnold Schwarzenegger's lines.

On Tuesday Nov. 11, 2003 Terminator III became available on DVD and I, of course, got a copy. I spent an evening writing down Arny's lines! But this is not an obsession, I swear. Otherwise it would be on an ""Obsessions"" page.

And it won't stop...ever. As of now (April 2020, in the depths of the Corona Virus crisis) I've added Terminator: Dark Fate. Genisys has also been added.

I have decided to share my transcriptions with the world and so include all five TERMINATOR movie Arny dialogs. No, you needn't send any money unless you really want to. Please be advised that there is the use of strong language in these dialogs, proceed appropriately.

But first...of course....some statistics. Terminator I: Arny had some 16 dialog sections (or, as I like to call them, soliloquies) with a total of 26 sentences. But, hey, he was a newcomer. Since that time, long ago, he has become something of a box office sensation and one would expect his line totals to increase. And the statistics bear this out:

Terminator II: Arny has 102 dialog sections with a total of 132 sentences! He was at his nadir on Terminator II, there was no increasing his box office appeal and so the third saw only a slight increase in dialog time.

As of T4: Interestingly, however, his sentences to dialog section ratio was highest in the first Terminator! BUT, as of T5 he achieved the highest ratio.

These transcripts give you great fodder for cocktail parties and such. Questions like "What was the last line Arny uttered in Terminator I?" are now easily studied and memorized.

Finally, what are the most common things Arny says? A quick, unofficial, glance shows these to be "I'll be back" (of course), "Negative", "Now", "Get out", and "Get down".

Without further ado, the transcripts.

Possible responses on Termys display to: Hey Buddy, you gotta dead cat in there or what?

Back in the parking lot:

At the Mental Hospital:

{ Melts with thumbs up Finis. }

Terminator III Rise of the Machines

Lines denoted as N (N). The first number is the dialog section (soliloquy), the second the number of sentences in that section (cumulative). Comments in brackets ( [comment] ) are items displayed on the terminators Heads Up Display screen.

Back on the road:

San Francisco, response to "Hey asshole! Get off the road.":

In car after meeting John Connor:

After blowing up bunker:

In driveway getting ready to go:

At bottom of pit:

For those that read it all here is a reward to a nice Arny Quote link...